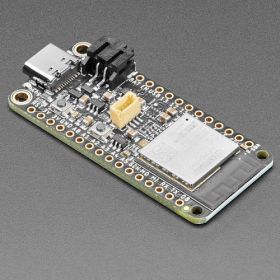 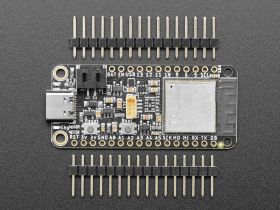 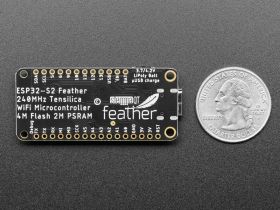 The 5000-ADA is a highly-integrated, low-power, 2.4 GHz Wi-Fi System-on-Chip (SoC) solution that now has built-in native USB as well as some other interesting new technologies like Time of Flight distance measurements. With its state-of-the-art power and RF performance, this SoC is an ideal choice for a wide variety of application scenarios relating to the Internet of Things (IoT), wearable electronics, and smart homes.

That's right - it's the new Adafruit ESP32-S2 Feather! With native USB and 4 MB flash + 2 MB of PSRAM, this board is perfect for use with CircuitPython or Arduino with low-cost WiFi. Native USB means it can act like a keyboard or a disk drive. WiFi means its awesome for IoT projects. And Feather means it works with the large community of Feather Wings for expandability.

Please note the Feather ESP32-S2 has a single-core 240 MHz chip, so it won't be as fast as ESP32's with dual-core. Also, there is no Bluetooth support. However, we are super excited about the ESP32-S2's native USB which unlocks a lot of capabilities for advanced interfacing! This ESP32-S2 mini-module we are using on the Feather comes with 4 MB flash and 2 MB PSRAM so you can buffer massive JSON files for parsing!