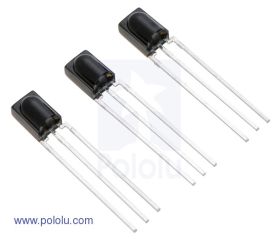 The Vishay TSSP58038 is a modulated IR receiver that is designed specifically for sensing applications instead of data communication for remote control. Unlike most similar-looking units, it has a fixed gain that makes it respond more predictably and quickly to IR light modulated at 38 kHz. They are sold in packs of three units.

Unlike typical IR receiver modules that automatically vary their gain for optimal communication, the Vishay TSSP58038 modulated IR receiver has fixed gain to enable predictable sensing in both reflected IR and breakbeam arrangements: the output will go low as soon as it is exposed to the faintest 38 kHz it can detect. The TSSP58038 is basically a through-hole version of the sensor used on our high-brightness 38 kHz IR proximity sensor modules. Because those proximity sensor modules allow user control of IR transmission, a pair of those modules combined with a few standalone TSSP58038 sensors can allow sophisticated object detection systems in which one emitter is enabled at a time and the reflections monitored by all other sensors.

These sensors are sold in packs of three units. We also carry the similar TSSP58P38, which includes automatic gain control.