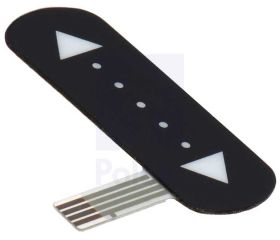 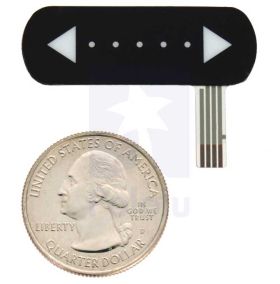 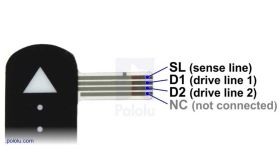 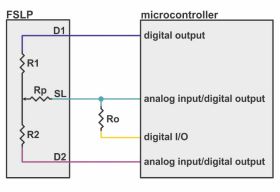 This force-sensing linear potentiometer (FSLP) from Interlink Electronics is a passive component with internal resistances that independently change in response to the location and magnitude of an applied force. This allows a microcontroller with an analog-to-digital converter (ADC), such as an Arduino or A-Star, to easily determine where and how hard the strip is being pressed, enabling advanced touch-control user interfaces (like menu navigation) or sophisticated tactile sensors. The FSLP is effectively a force-sensing resistor (FSR) that can also simultaneously sense position. The video above shows a sample project with the similar 4″ FSLP strip being used to control an LED strip: position determines the number of lit LEDs and pressure determines the LED color. This shorter 1.4″ FSLP strip could easily be substituted for the one in the video. The Arduino code used in the example is available on github, and it has functions for reading pressure and position that could be helpful in getting started using this sensor.

The 1.5″ × 0.53″ strip is light (0.5 g) and extremely thin (0.025″), with an active sensing area of 1.4″ × 0.39″ and a flexible 0.55″ × 0.2″ sensor tail for accessing its three terminals (the fourth terminal is not used). It does not appreciably compress when pressure is applied, and while it is flexible, it is intended to be used on smooth, flat surfaces since bending can adversely affect its performance. The FSLP has a masked adhesive backing for easy mounting.