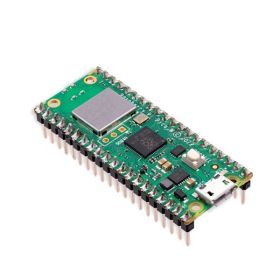 The PI-PICO-WH is an RP2040 microcontroller. It is similar to the Raspberry Pi Pico, but it has built-in wireless capabilities. This version also has pre-soldered headers. The CYW43439 supports IEEE 802.11 b/g/n wireless LAN, and Bluetooth® 5.2.

The Raspberry Pi Pico W builds upon the great cost-for-performance metrics of the Pico and add WiFi to the board. The Pico W features the same attributes as the Raspberry Pi Pico and also incorporates an Infineon CYW43439 wireless chip. CYW43439 supports IEEE 802.11 b/g/n wireless LAN, and Bluetooth® 5.2. (6/30/2022: Only Wireless LAN is supported on the Pico W at the moment, this will be updated as the new features become available)

The Raspberry Pi Pico line is a low-cost, high-performance microcontroller board with flexible digital interfaces. It feature the RP2040 which marks Raspberry Pi's first microcontroller designed in-house. Pico provides minimal (yet flexible) external circuitry to support the RP2040 chip (Flash, crystal, power supplies and decoupling and USB connector). The majority of the RP2040 microcontroller pins are brought to the user IO pins on the left and right edge of the board. Four RP2040 IO are used for internal functions - driving an LED, on-board Switched Mode Power Supply (SMPS) power control and sensing the system voltages.

Pico uses an on-board buck-boost SMPS which is able to generate the required 3.3 volts (to power RP2040 and externalcircuitry) from a wide range of input voltages (~1.8 to 5.5V). This allows significant flexibility in powering the unit from various sources such as a single Lithium-Ion cell, or three AA cells in series. Battery chargers can also be very easily integrated with the Pico powerchain. Reprogramming the Pico's flash memory can be done using USB (simply drag and drop a file onto the Pico which appears as a mass storage device) or via the Serial Wire Debug (SWD) port. The SWD port can also be used to interactively debug coderunning on the RP2040

Pico has been designed to use either soldered 0.1" pin-headers (it is one 0.1" pitch wider than a standard 40-pin DIP package) or can be used as a surface mountable "module", as the user IO pins are also castellated. There are SMT pads underneath the USB connector and BOOTSEL button, which allow these signals to be accessed if used as a reflow-soldered SMT module.