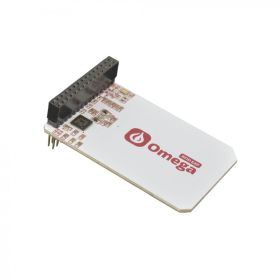 The RFID/NFC Expansion for Onion Omega2 will bring a new world of exciting functionality and application to your Omega2 module. It plugs into your Onion Expansion, Arduino or Power Dock, and provides you with both NFC and RFID communication. This board makes use of the PN532 controller chip, which is the most popular NFC chip, and is embedded in most smart phones and devices that support NFC. It can read and write to tags and cards, communicate with phones (for example payment processing), and ‘act’ like an NFC tag.

NFC (Near Field Communications) is a way for two devices very close to each other to communicate.  It is an extension of RFID, so anything you can do with RFID you can do with NFC. Since it can read and write tags, you can use this for RFID-tag projects as well.